When Crawley Hockey Club (CHC) decided to create a new state of the art sporting facility, their fundraising target was £185,000.

The initial local fundraising and publicity activity went well, but they realised that to achieve such a large sum, they would need to bid for national funds. The Club contacted us to get for help from a local source and met with Karl Parks, now our Community Groups Development Manager, to outline the project, the Club’s aspirations and to ask for advice on the best approach.

From the outset CHC were impressed with the depth of his knowledge of local and national funding streams and his practical approach to beginning this journey.

Karl was not daunted by the scale of the project and instilled confidence that this was not only achievable but would result in a real asset for the town.

Initially he advised small local bids alongside Club fundraising to show and encourage local support. He suggested people and local organisations that might be supportive and provided the necessary introductions, for example The Crawley Youth Forum and the Neighbourhood teams. He also advised that rejection would be an inevitable part of the journey and that the lessons learned would prove useful.

Conscious that our local success involved time-limited funding we approached Karl to be an in-depth reviewer/advisor as a critical friend for the first of our major national grant applications.

This role was crucial as over the coming months we re-worked 7 drafts before we were confident that we were in a position to submit our bid.

Karl’s insight and advice were key in the successful bid and we were conscious of the time, thought and care he took in providing constructive criticism and on-going advice. He was always prompt in his attention even when under pressure from other demands on his time.

His advice was directed to improving the bid document to such an extent that it was always readily accepted.

Crawley HC is clear that Karl’s professional guidance was instrumental in the successful grant award of £30,000 from the Community Asset Fund. This was a unique achievement in West Sussex for Crawley in 2019.

The experience of working closely with Karl provided the Club with the confidence and knowledge to go on to complete other successful national bids culminating in a further £56,000 awarded.

The final grant of £40,000 was awarded by The National Hockey Foundation in the autumn of 2019 allowing the pitch build to be completed that year.

The first match was played on December 7th 2019 on CHC’s new home pitch at Hazelwick School.

CHC is indebted to Karl Park’s unwavering support and expertise in enabling our project to succeed.

His positive approach, unfailing enthusiasm and generosity through 2018/2019 is greatly appreciated and valued.

This partnership between a Crawley sports club run entirely by volunteers and CCVS (now Crawley Community Action) has resulted in the provision of a state of the art facility for the Club, the students in the largest Secondary school in the town and the wider Crawley Community for years to come.

Without a playing surface of this quality hockey in Crawley in the future would have ceased to exist. 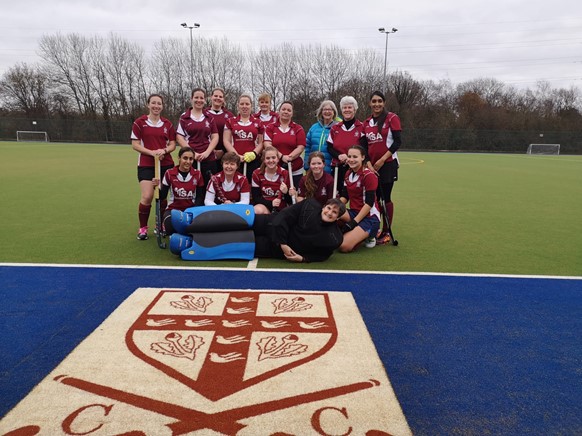